Secret Deals: Alstom and Bombardier in talk to merge their Rail Business Units 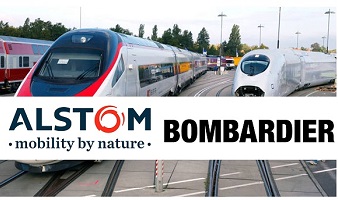 Earlier also these two companies have held preliminary talks about a rail business deal, said the persons aware of the deal. However,  they don't want to disclose their names as the matter is related to international business relationships between two big global companies.

The representatives for Alstom SA and Bombardier Inc. are silent on the matter and declined to comment at this stage. Some experts said that the latest considerations between Alstom and Bombardier could face antitrust scrutiny, and there’s no certainty they will lead to a transaction.

Bombardier is exploring this option to stabilize its portfolio into the global rail market. The deliberations started before Bombardier shocked the market last week by warning of disappointing its fourth-quarter sales, said sources. Recently the shares of Bombardier dropped as much as 39%, a record decline.

Sources said that the merger of Rail Business Units of Alstom and Bombardier may help them to counter growing competition from the Chinese Rail business. In 2017, Bombardier held a discussion with German Rolling Stock manufacture Siemens AG but Siemens suddenly opted to pursue a deal with Alstom.

Later in February 2019, Europian Union had regretted the merger of rail business units of Alstom and Siemens in view of the increasing threat of Chinese competition. Commenting on the latest deliberation between Alstom and Bombardier, Mustafa Okur, a European Industrials Analyst said:

Revenue is similar and a merger would create a significant concentration of sales in the European rolling-stock sector, akin to the recently rejected Alstom-Siemens Mobility deal.

The past track record of Bombardier is very good as a manufacturer of the metro coaches, commuter and regional trains. The company has collaborated in high-speed projects including Alstom’s high-speed TGV. Bombardier had generated sales of USD8.9 billion from the rail transport business in 2018 while Alstom’s reached USD9 billion (8.1 billion euros) in its latest fiscal year.

In 2015, Bombardier had sold a 30% stake in its Berlin-based train business to pension fund Caisse de Depot et Placement du Quebec, valuing the unit at USD5 billion at the time and helping the firm raise capital as it faced a cash drain from delays for its new jets. Before that, it had considered an IPO of the rail unit, reported Bloomberg.