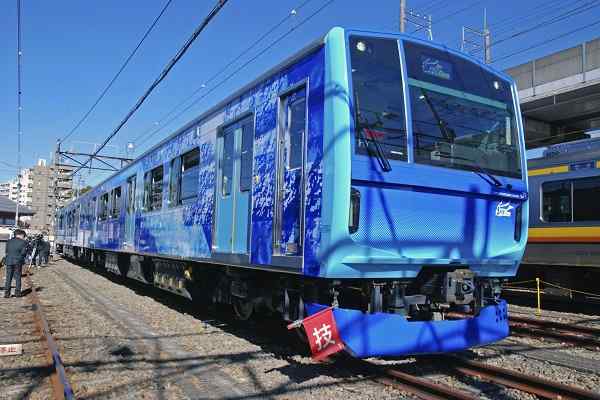 Tokyo, Japan (Urban Transport News): Japan's largest railway operator East Japan Railway has developed the first hydrogen-powered train that is a step toward the nation’s goal of becoming carbon neutral by 2050. The company will test this two-coach hydrogen-fueled train next month. The tests will be carried out on the Nanbu Line, which connects Tachikawa Station in Tachikawa, Tokyo, and Kawasaki Station in Kawasaki, Kanagawa, as well as some other lines.

The “Hybari" train costs about $35 million (JPY4bn) and can travel up to 140 kilometers at a top speed of 110kmph on a single filling of hydrogen fuel.

The hydrogen-fueled train has been developed by East Japan Railway Co in partnership with Toyota Motor Corporation and Hitachi Ltd with the aim to replace its diesel fleet and look to export markets. The commercial services of the train are likely to begin in 2030.

Japan has made hydrogen a key clean-energy source to reach net zero. Toyota is aiming for a 10-fold increase in the production of hydrogen-fuelled Mirai cars with its second-generation model, while more fuel-cell buses and commercial vehicles are on the road.

The government has said it aims to boost the use of hydrogen to 20 million tonnes by 2050, while energy companies such as Iwatani and Kawasaki Heavy Industries are trying to build hydrogen supply chains to bring down its price.

Europe has been a pioneer in hydrogen trains, with Germany rolling out the world’s first hydrogen train 'Coradia iLint' built by Alstom SA in 2018. Siemens AG and Deutsche Bahn AG are developing new regional trains and special fueling stations and will test them in 2024.