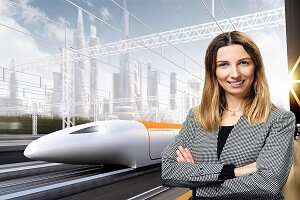 Hyper Poland develops the next generation of High-Speed Railways (HSR), based on magnetic levitation, linear motor, and autonomous control systems, which can be subsequently transformed into a vacuum version. It is the only company in the world able to gradually implement hyperloop-inspired solutions as an upgrade for the railway industry. In a recent interaction with Urban Transport News team, Ms. Kasia Foljanty, Co-founder and CBO at Hyper Poland has talked about the vision, mission, and journey of the start-up working for advancing the speed of Railways. Here are the edited excerpts:

Please tell us about your professional journey and what attracted you to become a part of Hyper Poland?

Ms. Kasia Foljanty: I am a co-founder of Hyper Poland and I am responsible for architectural design, urban planning, and Hyper Poland’s marketing, design, and public relations. Magnetic and vacuum rail are no doubt the future of transportation and it was for me a natural step to move from transport research to the development of new technologies. I have obtained a Ph.D. in Architecture and an MBA in Innovation and Data Analysis at the Institute of Computer Science of the Polish Academy of Sciences in cooperation with Utah Valley University, USA. Before joining Hyper Poland in 2016, I gained experience in design offices in Warsaw and Berlin and I was a scholarship holder of Polish and German research programs, which allowed me to work at leading research institutes in Germany specializing in civil engineering and transportation.

How did the idea of Hyper Poland come about?

Ms. Foljanty: Hyper Poland was initiated in 2015. Initially, it was an academic think-tank that consisted of students as well as scientists and alumni representing Warsaw University of Technology. Between 2015-2017 this team has been involved in various hyperloop competitions and was the finalist of two SpaceX Hyperloop Pod Competitions initiated by Elon Musk. In 2016, I and Łukasz Mielczarek (current head of infrastructure) joined Hyper Poland. By broadening the skillset of Hyper Poland’s team with our expertise, we were able to win the BIM of Innovation Award at the Build Earth Live competition in Dubai. When Przemek Paczek (current CEO) joined Hyper Poland in late 2016, this academic think-tank turned into a company. Simultaneously, our team has developed a unique three-stage approach to hyperloop technology development and in 2019 completed work on a 1:5 scale technology demonstrator, consisting of a 48-meter test track and a vehicle.

What is the MAGRAIL system? How this technology is different from Hyperloop Technology?

Ms. Foljanty: The magrail system is a unique rail technology using magnetic levitation and operating on existing railway tracks at a speed of 300 km/h (186 mph) - 415 km/h (258 mph). Magrail can be subsequently transformed into a vacuum system - hyperrail, with a top speed of 600 kph (373 mph) on existing conventional tracks and 1,000 kph (621 mph) on high-speed rail (HSR) lines. Our last step, hyperloop, will require new dedicated routes. What distinguishes this stage is that it requires a vacuum environment, high speed of a vehicle (up to 1,200 km/h), and no contact with the ground during movement. In our case, it will use subsystems tested in the first two stages (magrail and hyperrail).

Ms. Foljanty: Magrail is a magnetic railway transportation system that uses existing conventional railway corridors. Both conventional trains and magnetic levitation vehicles will use the same railway track interchangeably. The utilization of existing infrastructure saves costs incurred and time spent on the construction of new infrastructure. Additionally, there is no need to adapt urban plans for new infrastructure. The magrail system can be fully integrated with existing railway infrastructure, without making any changes to the existing rolling stock. With our magrail technology, we strive to radically transform the current transportation system. We aim at restoring the competitiveness of railways by combining high-speed, just-in-time availability, and environmental friendliness.

How do you aim to compete with companies like VHO, Hardt which are also launching similar projects?

Ms. Foljanty: Hyper Poland develops the next generation of High-Speed Railways. We are the only company globally that can gradually implement hyperloop-inspired solutions as an upgrade for the railway industry, using existing railway corridors and regulations. On the other hand, we closely cooperate with other European hyperloop companies like Hardt, Zeleros, and Transpod. Recently and because of our joint involvement, the European Union has recognized hyperloop worthy of support. The member states where the European hyperloop companies are located have founded a Joint Technical Committee - JTC 20. Its goal is to create a homogenous system of ultra-high-speed transportation throughout the continent.

What innovations are you in the process of introducing through the project?

Ms. Foljanty: Magrail vehicles can reach high speeds due to the relatively low height and the low mass of the magrail vehicles and the use of unique technologies like magnetic levitation, electromagnetic linear motor, and special tilting mechanism.

How COVID-19 Pandemic is affecting the deadline for launching your project?

Ms. Foljanty: Transportation infrastructure is a vital part of all economic and social ecosystems. People and businesses will always need it. Developing new ways of more efficient use of existing railway infrastructure in a more innovative way is key for bringing the global economy to the next level and revitalize it after the turmoil. Given the time needed for development, testing and certification, the current collapse has no direct impact on the outlook for magrail technology (and in future hyperloop). Despite - quite probable according to today's forecasts - a period of several years of "catching up" of demand by air transport - the most likely scenario remains a return to the trend line assuming a systematic increase in the mobility of societies. What's more, a possible period of several years of the economic slowdown caused by the crisis may lead to the suspension of some investment projects, including in high-speed railway lines. As a result, magrail technology will "gain" time and may be ready to be introduced when the infrastructure industry begins the "catching up" period after a few years of slower investment pace.