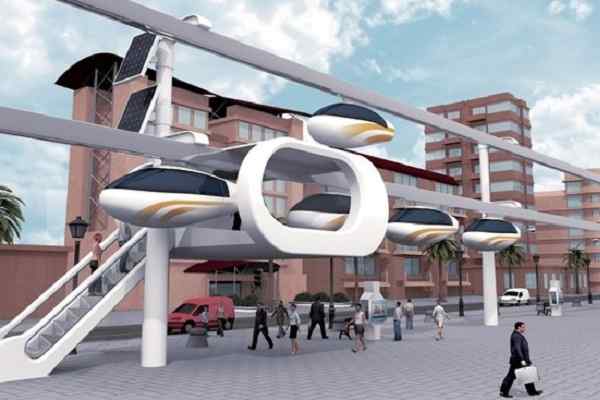 Dubai, UAE (Urban Transport News): Dubai’s Roads and Transport Authority (RTA) is making relentless efforts to improve and expand the public transport network in Dubai to keep pace with the sustained growth of the city, which is shaping into a premier business and service hub worldwide.

Accordingly, a Memorandum of Understanding was signed between RTA and skyTran a global company specialised in the development of suspended transport systems, in the presence of representatives from both parties. Abdul Mohsin Ibrahim Younes, CEO of Rail Agency, RTA signed a Memorandum of Understanding (MoU) on behalf of RTA while John Cole, CEO of skyTran represented the company.

“The signing of this MoU highlights RTA’s continuous efforts to team with global specialist firms in developing advanced public transport technologies capable of attracting more riders by offering them safe, fast and luxurious transit experiences, besides curbing traffic congestion in the city. One of these solutions is developing Sky Pod units operated by “Maglev” technology, which are characterised by their safety and speed as well as the saving much of the resources associated with the daily mobility of people,” said Abdul Mohsin Ibrahim Younes.

“The signing of this MoU with a leading company in the field of suspended transport systems, such as skyTran, is a milestone in RTA’s efforts to introduce advanced technologies and innovative services in the field of public transport. It will enhance the integration of public transport systems, which in turn will boost the economic growth, attract more investments and improve the standard of living in Dubai,” he added.

“We are excited to sign this MoU with RTA and play an active role in realising RTA’s ambitious projects and initiatives in the field of public transport. It will also support the Government's drive to rank Dubai as the smartest and happiest city in the world,” said John Cole, CEO of skyTran.

He commended the tremendous achievements and vital projects accomplished by RTA over few years, rendering Dubai a global icon.

“RTA’s public transport network is amongst the most advanced systems worldwide, and Dubai can boast of the infrastructure of roads, bridges, and tunnels second to none worldwide,” he noted.

This MoU is a practical manifestation of the Dubai Self-Driving Transport Strategy aimed at converting 25 percent of total mobility journeys in Dubai into driverless journeys by 2030.