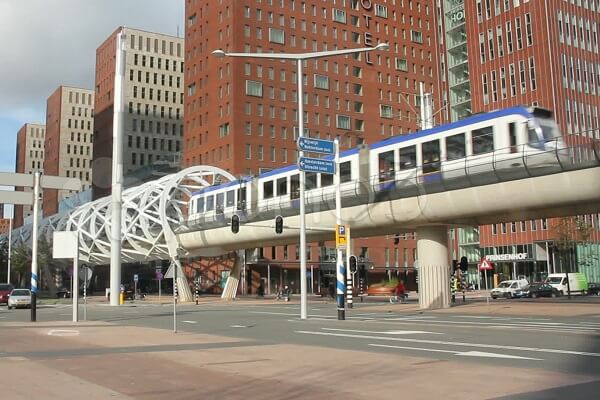 New Delhi (Urban Transport News): After Delhi Metro and Chennai Metro, Noida Metro Rail Corporation (NMRC) has planned to run light urban rail transit 'Metrolite' to connect interior areas of Noida and Greater Noida. In a recent meeting called by the Ministry of Housing & Urban Affairs (MoHUA), the NMRC has proposed to run 'Metrolite' in upcoming metro corridors in Ghaziabad, Noida and Greater Noida to connect interior areas. NMRC officials said that the 'Metrolite' will be more useful and budget-friendly as the demand will be optimized by increasing its frequency during peak hours and reducing it during non-peak hours.

Metrolite infrastructure can be built on the surface (at grade) as well as elevated, as per the availability of land and space in the city. Its tracks are narrower than the standard/broad gauge used in most of the existing metro lines and there is no overhead extension for wiring, making it safer. The Delhi Metro Rail Corporation has also planning to deploy 'Metrolite' trains in its upcoming corridors under the phase-IV project. This is because a light urban rail transit system with smaller coaches is nearly 50% cheaper as compared to the standard/broad gauge metro network. PD Upadhayay, the spokesperson of Noida Metro, said,

Presently, the cost of constructing the metro rail system is around Rs. 200 crores per kilometer, while the Metrolite system costs around Rs 60-100 crore, depending upon the infrastructure requirement. However, the passenger-carrying capacity of a Metrolite coach is anywhere between 70 and 300 which is much less as compared to the current metro coach that can carry 1,034 people at a time. "Metrolite can be managed by increasing frequency during peak hours and reducing headway during non-peak hours”.

“It would be better for us often we need to operate a metro even if it’s going empty. In such cases, the cost of operating the Metrolite will be much less than operating a normal metro,” Upadhyay said. He said that the metro network may also be at grade at some places in Noida as the Metrolite can be made at the surface level as well be elevated. The existing metro systems either elevated or underground so far.

Noida has wide road space where we can use the green belt and wayside for the Metrolite track, unlike smaller cities with narrow roads. We just need to create a crossing like a small bridge or an underpass near intersections to avoid mixing with usual traffic. The surface system will be very convenient for people as it will be easily accessible. There will be no need for an extensive platform and security checks.

The Noida Metro has also suggested that the proposed metro lines from Pari Chowk to Jewar also be converted to a Metrolite system, which will require another interchange requirement at Pari Chowk station.