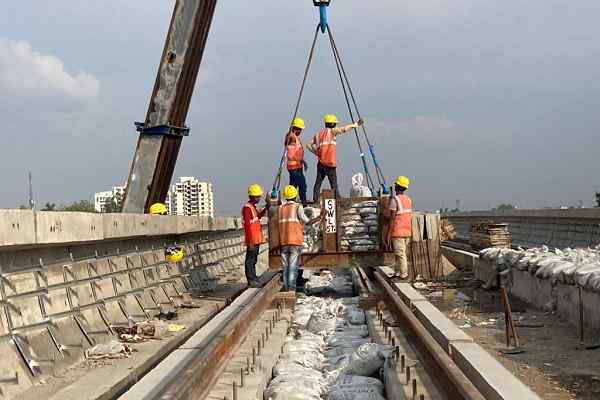 Kanpur, India (Urban Transport News): The civil construction works of the 9-km long Priority Corridor of Kanpur Metro Project are about to complete and along with this, the arrangements for the trial run have also gained momentum. The contractor Afcons Infrastructure has started ‘Load Test’ of the elevated civil structure on the Priority Corridor (IIT to Motijheel) today. This assessment is carried out with the weight of about one and a quarter times (1.25 times) the weight of that part of the train that falls on the girder considering that the entire train is fully occupied with passengers. The test will be conducted with a weight of about 248 tonnes.

Congratulating Metro engineers on the commencement of load test on the Priority Corridor, UPMRC's MD Shri Kumar Keshav said, "Kanpur Metro project is being constructed while following the international standards, where top notch technology and raw materials are being used. UPMRC has commenced the load test on the Priority Corridor, which has a major significance considering the trail run to be held in November this year."

The Priority Corridor of the Kanpur Metro Rail Project is fully elevated and there are mainly three types of girders that have been used to prepare the viaduct viz. U-Girder, I-Girder, and Steel Box Girder. The ‘Load Test’ will be processed on I-Girders between IIT-K and Kalyanpur, while U-Girders and Steel Box Girders will be tested in Rawatpur.

According to UPMRC, the first train will reach in Kanpur Metro's Poletechnic Depot by end of September this year and trial run may be commemnced from November to open the priority corridor in January 2022 before UP Assembly Elections.